Knowing that the Sun is less than three weeks away from your income sector and from today Saturn is just five weeks away from his first visit in three decades, is giving Venus the freedom to make her first full week here more about the 'what' than the when, where and how. Venus' job is to work with dreamy Neptune to fire up your motivation, ensuring that you have something the aim for when the money gods roll out their big guns. 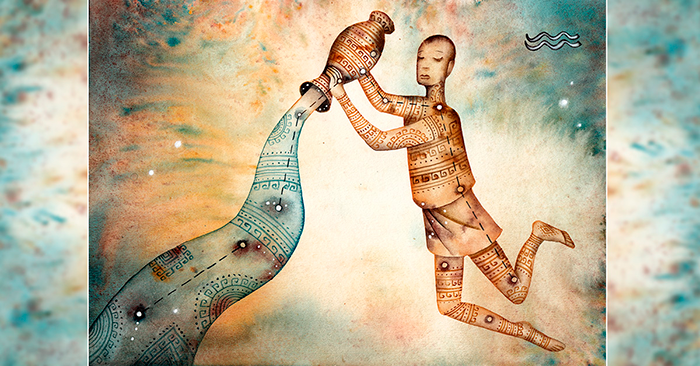 As long as money never sleeps, the root of tomorrow's money success of Aquarius is daily efforts for the business.

Just having the Moon return to your work sector in the heart of the working week is an advantage. However, with the Moon not only coming full circle from last month's Full Moon but right in the heart of Venus, the planet of money's first full week in your income sector, this kicks off what could be an exciting and defining few days across the income, work and career fronts.

Raise your cash flow with a weekly money horoscope! Because Money has no holidays, even for Aquarius.

As Venus spends her first full week in your income sector it is less about what might happen and more about the internal influence this can have. There is also a need to take your time, for Venus has returned to find a unique situation that you have time to adjust to. When Venus returned last Friday it was to find only Neptune here, with the planets of money and dreams on their own in your income sector for the first time in three years. It was just six weeks ago that Jupiter left, with the seeds for income growth and expansion planted as you wait for the Sun, Mercury and Saturn to return to help with the harvest and to turn dreams and a sense of what's possible into reality. All Venus and Neptune have to do is nurture those dreams and a sense of what's possible. However, Venus will still be keen to exploit any low hanging income potential, something that the Moon might help with this week. It is when the Moon moves through your work sector from Thursday to Saturday that the stars will align across the income, work and career fronts.

In any case, Aquarius has to plan financial stability. This is the key to success in February 2023.

As you move into the new month you are almost exactly halfway between Jupiter, the planet of luck and expansion's departure from your income sector in December and Saturn's return early next month. While they will never spend time together here, they are part of a journey that began with Jupiter's return in May 2020 and will end with Saturn's return in February 2026, with a common thread running through this whole nearly five year period. That common thread is Neptune, the planet of dreams and fantasies, who worked with Jupiter to fuel a sense of what's possible and will spend the next three years working with Saturn to turn dreams into reality. Neptune began the year aligned with the asteroid Juno, the queen of commitment and while she left last month, this has left you with the resolve to turn dreams into reality and to keep Jupiter's quest for income growth and expansion alive, even if you don't yet know the when, where and how. This left Neptune on his own for two weeks, until Venus returned and this is where things stand as you move into the new month. It has been three years since Venus and Neptune were last on their own here and until the Sun returns on 19th February, this allows the planets of money and dreams to inspire your imagination and fuel your dreams in a way that has nothing to do with keeping your feet on the ground. With Saturn returning to begin his three year visit on 8th March, the next and final phase is just around the corner and the Sun, who will turn the solar spotlight onto your income situation, matters and options the day before Venus leaves will still be here by then. A New Moon on 20th February will peak 50 minutes before Venus leaves and is the perfect way to end a phase that has been more about motivation and less about the details. The Moon is here until 22nd February, with a chance to transition into the next more practical phase. Meanwhile, with no planetary activity on the other side of the financial fence, the Moon's return to your financial sector from 7th February to 9th February will be a valuable chance to check in on money matters.