In the lead up to the Moon's return to your financial sector tomorrow, this is an important point in any month for having your antennas up while taking a wait and see approach. Especially with the Moon not only coming full circle from a Full Moon four weeks ago but at a time when all the focus is on the income side of the financial fence. The next few days could see a lot of things fall into place financially. 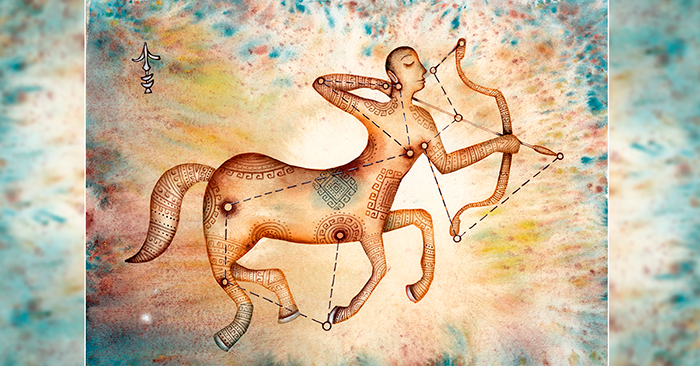 As long as money never sleeps, the root of tomorrow's money success of Sagittarius is daily efforts for the business.

The Moon not only returns to your financial sector today but coming full circle from last month's Full Moon this could see things fall into place or just start to make sense. While this will see the Moon clash with Mercury, now in his last full week in your income sector over the coming days, support from Venus, the planet of money will turn this into motivation.

Raise your cash flow with a weekly money horoscope! Because Money has no holidays, even for Sagittarius.

While the Moon will leave your work sector on Monday, this not only gets the new working week off to a good start professionally but financially as well. The Moon is here just as a friendly aspect between Uranus, who turned direct in your work sector last week and Mercury, moving into his last full week in your income sector peaks. A friendly aspect to Pluto in your income sector before leaving will further cement a partnership between income and job matters just as both have been given the green light. Meanwhile, it is at the other end of the week that the other side of the financial fence will get some much needed attention. Unlike your income sector, where there is continuous planetary activity, until Mars returns to your financial sector in March it is the Moon's return each month that helps you to stay on top of money matters. Because the Moon is coming full circle from a Full Moon four weeks earlier, this could see a lot of things fall into place on the financial front.

In any case, Sagittarius has to plan financial stability. This is the key to success in February 2023.

While this is likely to be a good month for both income and job matters, there is something familiar and ordinary about this, but at the same time there is something very different about this. Familiar and ordinary, for while the Sun left your income sector towards the end of last month, having Mercury still here is not that unusual. What is unusual is how long Mercury has been here, for it was in early December that he returned for what is normally a 14 to 15 day chance to work with his smart head for money to get your head in the game and to think on your feet. This is thanks to a retrograde turn that not only ended last month but just four days before Uranus' direct turn in your work sector. This has given income and job matters the green light and after a friendly aspect between Mercury and Uranus, the third in just six weeks late last month, they will remain in lockstep. It is Mercury's departure from your income sector on 12th February that will leave Pluto, the planet of change and revolution on his own and this is when things take an unfamiliar turn or they are about to. The Sun and the faster planets will always move through your income sector in the early and latter weeks of each year but since 2008, Pluto has kept the momentum going for the rest of the year. However, after nearly 15 years here Pluto is getting ready to leave as well and in his last full month, he is using Mercury's extended stay to make both short and long term choices, decisions and plans. What makes Pluto's last full month here even more important is that it is just two days after he leaves next month that Mars will return for his belated visit to your financial sector, shifting all the focus onto the other side of the financial fence. This makes the Moon's visit to your income sector from 2nd February to 4th February more than just a chance to sharpen your nose for money and act as a trigger. Meanwhile, the Moon's return to your financial sector from 16th February to 18th February is more than just a chance to check in on money matters, with a chance to prepare for Mars' return.